The Mad Tibetan – Stories From Then And Now by Deepti Naval 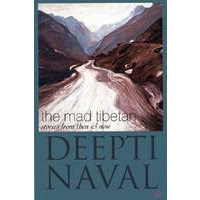 Yes, in case you are wondering, it is the same Deepti Naval. Same as in, the actor (these days one doesn’t use the word actress) who has done over sixty movies. Naval has been published by Amaryllis, an imprint of Manjul Publishing, which will shortly bring out my novel When The Snow Melts. A few weeks ago, I had attended a book discussion event at the Crossword Book Store in Juhu where Deepti Naval discussed The Mad Tibetan – Stories From Then And Now with the even more famous actor Shabana Azmi and had picked up an autographed copy of the Mad Tibetan.

Yes, I knew that Naval has many talents, that she can paint, write and take pretty photographs, but reading is believing and until I finished the first of the eleven short stories that make up this collection, I didn’t really believe an actor could also write. Proof of the pudding is always in the eating, right?

The Mad Tibetan collection reminded me of a dandelion seed, with each story like those small seeds with white whiskers, which when you blow at them, float in the air for a few tantalising minutes, capturing a few fleeting, precious moments, before they are lost forever.

What I liked most about The Mad Tibetan collection was the way it dealt with relationships between men and women. There is mutual attraction, there is tension and some of the feelings are one-sided, but the man is not always on top. Bombay Central is the perfect example of this – Jatin is young and new to Bombay and when the man who befriends him on the train offers him a place for the night, one doesn’t suspect much. Even Jatin’s first impressions on meeting the wife do not arouse one’s suspicions as to what will follow. However, Premonition makes no bones about Vas’s attraction for the woman on the bus. She’s a bit older than him, but she has noticed him and seems to like him. Vas’s premonition of what’s going to happen stays in the background and distracts one from Vas’s pursuit of the woman, which is described so well and doesn’t have an iota of the usual note of harassment.

Tulli is a true story of how Naval made an expedition to a red light district in Mumbai to meet a real prostitute or two, before she played the role of a prostitute in a movie. It all goes off well, till Naval comes face to face with a dreaded pimp, one whom every woman in that brothel was scared of. The pimp is drunk and he mistakes Naval for a new girl in his keep. The two male friends who accompanied Naval are not at hand and Naval is in real trouble until Tulli, the madam she has been talking to, draws the pimp off Naval. Naval tells us that, ‘I stood at the door, unable to move, choked by the scenario before my eyes. The man, ferocious a while ago, was now crumbling in Thulli’s arms. I can never forget her face, the last that I saw of Thulli that night, as we looked at each other: one woman to another, our eyes glistening! I slowly turned towards the dark staircase, then looked back one last time, at Thulli’s world, stunned by the dichotomy…… the absurdity of equation in human bonds.’


Is Birds also a true story from Naval’s personal dairy? Possibly. The narration is from the heart and the narrator’s pain is contagious. Between Balraj Sahni and Birds, one gets to experience hope and happiness, admiration and anger, sorrow, disgust, irritation and helplessness.

The acknowledgements page at the beginning of the book is enlightening as well as perplexing. So, Ruth Mayberry, the last story in the collection is an interpretation of the life of a dear friend. However, where exactly has Naval planted the bitter-sweet memory from a childhood in Himachal which her Naval’s friend Neeta Bakshi has shared with Naval? My money would be on Sisters, not just because it is set in Joginder Nagar, which I know is in Himachal Pradesh, but also because an aunt of mine once shared a bitter childhood memory with me. Once this aunt had returned home from boarding school for her summer vacations, her hair full of lice. My aunt’s aunt (who looked after my aunt since her parents lived overseas) had taken drastic measures and had her long tresses cut off immediately. Something similar happens in Sisters, but there’s a lot more to that story than the tonsuring of two lice-ridden heads.

The Mad Tibetan which has lent its name to this collection is a story of a …….well, a mad Tibetan whom Naval encountered in Leh. Naval tells us that the mad Tibetan is a bitter old man who is fierce and wild, but when he smiles, he is a child. Like many other stories, the ending is neither happy nor sad. The reader gets to meet the mad Tibetan firsthand and it’s time to move on. Period. The Piano Tuner, the first story in this collection, is also a similar vignette, this time of an old man in Bombay who once played the piano, but now reduced by Parkinson’s, tunes pianos with unsteady fingers. Most of the stories just end with the promise of a new and uncertain day. This is especially true of The Morning After where one finds Lily making a trip to Ghuggar to meet Dolma who seems to have a bad reputation in town. Dolma is dead, but lives on through her son Manu. Lily seems to be total stranger to Dolma and her household, but when she leaves Ghuggar, Manu goes with her and fittingly so. Do please read this wonderful book to find out why Manu should do so.
Posted by Winnowed at 10:03