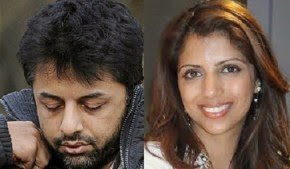 And finally Shrien Dewani has been extradited to South Africa to face trial!

Almost three years ago when I blogged about Shrien Dewani, extradition proceedings were going on and it was felt that they could go on for many more weeks or even months. Well, they went on for almost three years!

The core question seems to be whether Dewani is gay. This is because unless Dewani is gay, the prosecution will be hard-pressed to find a motive for the handsome, rich Dewani to hire killers to bump off his pretty and young bride.

The allegations about Dewani’s orientation have been swirling around ever since Anni’s murder. Dewani is supposed to have been a regular visitor at a gay fetish club called The Hoist, at Vauxhall. A German male prostitute named Leopold Leisser, who goes by the work name The Master, claimed that Dewani paid him GBP1,100 for three sex ¬sessions in London and the West Midlands.

Just after Dewani arrived in South Africa to face trial, it was reported that Anni Dewani had sent a honeymoon message to her cousin revealing that she had sex with 33-year-old Shrien “five times” in one night. The Police were said to have been left reeling by the text that experts have retrieved from 28-year-old Anni’s stolen BlackBerry. Naturally, if the Dewanis “did” it five times in a single night, it is unlikely that Dewani is gay. I however had my doubts about the genuineness of this report which was attributed to “sources”. Look at it this way: Anni’s text message was reportedly sent to her cousin. If Anni’s cousin had actually received such a text, Anni’s family, the Hindochas, wouldn’t be so hostile to Dewani. The Hindochas have all along been wanting Dewani to voluntarily face trial in South Africa. If the Hindochas thought that the Dewanis were having a normal married life, then they wouldn’t be fighting hard for Dewani to face justice.

Surely enough, a couple of days later, it was clarified that Anni had not sent any such sms. Rather it was stated that Anni had sent her cousin a text message to the effect that sex with her husband wasn’t to her satisfaction.

I wish we had some clarity on how the first report (which made the 5 times in a night claim) came about. The “source” had obviously not considered that if such a claim was made, the cousin who is supposed to have received the text would deny it. Also, how come no one knew that Anni had complained to a cousin about the state of her conjugal relationship with her husband? Of course it is possible that the Hindochas had passed on this information to the Prosecution and this was kept under wraps for use at the trial once Dewani arrived in South Africa. The Hindochas may have been forced to leak this information to counter the earlier insinuation. I just wonder though, when the extradition proceedings were going on, if this information had been made available, wouldn’t it have eased Dewani’s passage to South Africa?

When this trial is over, I hope the authorities in the UK and South Africa carry out a joint investigation to find out the extent of influence exerted over this trial by publicist Max Clifford and if any laws were broken as a result.


Posted by Winnowed at 14:40 No comments: Links to this post

If you are one of those Indians who were brought up on a diet of Soviet literature, readily available in India till the early nineties, you would be forgiven for assuming that Meena Kandasamy’s debut novel The Gypsy Goddess was written by a winner of the USSR State Prize in Literature and Arts and published sometime in the late 1970s or maybe even earlier. The subject matter – the massacre of forty odd Dalit labourers and their families by henchmen employed by upper caste landlords - is definitely a topic that would have fitted in within the milieu of Soviet literature. Since Kandasamy is known to be a poet, I had expected something lyrical, but no, Kandasamy adopts the tone (and even authority) of a Soviet era prose writer as she builds a novel around the massacre that took place at a place named Kilvenmani in Tamil Nadu’s Thanjavur (earlier known as Tanjore) district in 1968. If Kandasamy’s English was anything less than blemishless and beautiful, such an affected pitch/style would have fallen flat, but no, Kandasamy carries it off and one ends up doffing one’s hat in admiration at the end of the novel, which I assume must be a slim volume, since I got through it pretty quickly on my Kindle.

Kilvenmani is a village where the poor refer to a car as “pleasure”, something poor people in Tamil Nadu did even in the 80s, if my memory serves me right. Gopalakrishna Naidu is the main tyrant in the novel. A father-figure for the landlords of Nagapattinam, this balding, middle-aged man runs the Paddy Producers’ Association and seeks to address the interests of his own class in a manner which reminded me of several characters from a collection of Soviet Armenian Short Stories I read ages ago and which I have reviewed here. As Gopalakrishna Naidu schemes and plots and fights to replace the red communist flags with the yellow flags of the Paddy Producers Association, we the readers gain a ring-side view to the bloody tussle between the proletariat and the exploitative landlords.

In chapter 5 of her novel, Kandasamy publishes a Marxist Party Pamphlet which takes stock of the situation of those times, even as it calls on the workers to unite and fight for their rights. It is an unequal fight, the DMK Party in power has done precious little for the downtrodden and the landless poor suffer extreme hardship and oppression as they seek to obtain basic living wages from the landowning class. The policemen are tools in the hands of the landlords. Kandasamy singles out stalwarts of the Dravidian movement such as Karunanidhi and even Periyar EV Ramasamy for special treatment. We are told that after coming to power with the help of the Communist parties, Karunanidhi boldly proclaimed that the Communists would be crushed with an iron fist. As for the great Periyar, Kandasamy would have us know that “he was angry (about the massacre) and he showed it. There was little else that could be done when the government was actually run by his protégé.” Finally when the Landlords are tried on the scales of Justice, the High Court judges do a better job defending the landlords than even the defence lawyers and acquit them all.

Since The Gypsy Goddess is part story, part communist commentary, one is treated to quotations from individuals like Gramsci and post-modernists such as Derrida. Most of the commentary is a Kandasamy’s monologue, but as I said earlier, she does it well and I have no complaints.

Is Kandasamy a dyed-in-the-wool-communist or is she an open-minded writer willing to consider different points of view? The character Maayi suggests that she belongs to the latter class. Maayi, we are told, is the widow of the village’s witch doctor who once tamed evil ghosts and vampires and chased away devils and demons. When I first encountered Maayi, I assumed that she would be placed under the guillotine by the brave workmen of Kilvenmani. But no, they do nothing of that sort and one sees Maayi comfort the survivors of the massacre.

There were a few things I wishes Kandasamy had done differently. I would have liked to get to know atleast one of the victims much better, at least as well as I got to know Gopalakrishna Naidu. At times, I did wish Kandasamy would get on with the story and stop pontificating, but then, the story of the massacre could have been written in two pages and the pithy annotations make this novel what it is.

Once again, let me reiterate that Kandasamy writes exceedingly well. When describing the fire that wiped out so many innocent lives trapped in an enclosed space, Kandasamy says that “Born without eyes, the fire had used its feet to move. Lacking the forgiveness of water, it had burnt them with blindness and bitterness. So, that morning, the cheri did not carry the roses-and-marigolds smell of death. Only the coppery sick- sweet smell of charred flesh: a smell like nothing else, a smell that was almost a taste, a smell that was meant to be smuggled to the grave. Through the smoke clouds that hung heavier than mist, the police van returned to Kilvenmani to fetch the dead.” Since the official death toll was forty two, the two small babies who were charred to death were “habeas corpses”, Kandasamy proposes. As for the survivors of the massacre, “the police, in love with variety, generously give everyone multiple sections of the Indian Penal Code.”

Why the title The Gypsy Goddess? No, I am not going to play spoilsport and give that one away. When you have this book in your hands, you’ll find the answer in Kandasamy’s second chapter.

How does it all end? Does Kandasamy offer the victims even a semblance of justice or does she leave them waiting for a Communist dawn to receive reparations? Remember, this is ultimately a work of fiction and the author does have some freedom in this regard. Go on all of you, whether you are champagne socialists like me or genuine communists or someone just trying to make sense of the extreme poverty one sees in India, rush out and buy this book and read it to find out if the Kilvenmani massacre victims receive some form of closure from Kandasamy.
Posted by Winnowed at 22:02 4 comments: Links to this post