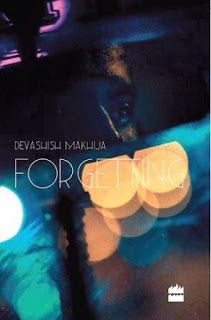 What makes one forget the past? Embarrassment? Inconvenience? Guilt? Because one doesn’t give a damn? How easy is it to read about a new dam being built and not think of the consequential displacement of the people living in the hamlets that will soon be submerged? In one of Makhija’s stories, an adivasi boatman is asked where his village is, as he rows a boat across the waters of a dam. ‘Right below us,’ he murmurs.

There are 49 stories in Devashish Makhija’s recently released Forgetting, each of them a concentrated gem of pain or suffering or anguish or sometime just a memory. In the first story By/Two, Rahman and Rahim are identical twins who share an autorickshaw in Mumbai. The autorickshaw is langdi, the lame one, a beast with three legs, one that sends tremors up the driver’s legs, like a cheap massage. One of the brothers is dumb and so the other is forced to play dumb as well – you see, only the dumb brother has a licence to ply the rick. To the entire world, the rickshaw has only one driver, a man who doesn’t have the need for sleep, a legendary Duronto among other drivers. The brothers had run away from Akbarpur to Mumbai when they were young, to escape from the tyranny of their butcher father. From Akbarpur, ‘a small filth-heap of a town that sprang up along the railway tracks soon after the East India Company ran the first train across the nations breasts.’ To Mumbai, a Mecca that feeds those who live in its bowels, despite the lies they tell. Every time there is a blast in Mumbai, Rahim is picked up for interrogation, Indian police-style. Beatings, kicks, questions. Finally Rahim’s heart gives way and the police tell Rahman that there’s a body in his rick. Do the memories linger forever? I assume they do.

Makhija’s writing is not pleasant. I don’t think it’s meant to be pleasant. It is messy and convoluted, just like memories and forgetfulness.

It’s not only the oppressed and the victims who try to forget, or remember, if you will. There are many middle-class Indians who see, feel, smell and try to hold on to their memories. A few would rather not.

I’m trying to forget, but it isn’t working. These stories are gonna stay in my head for a while, I think.
Posted by Winnowed at 05:45