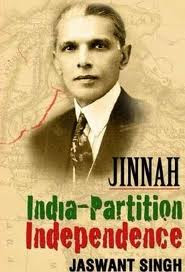 I got hold of this book mainly because I hoped it would answer a simple question I’ve had for a long time. Did Jinnah fight for an independent Pakistan because he genuinely believed that Muslims would not be treated fairly in India? That creating Pakistan was the only possible way Muslims’ rights could be protected? Or was it because he was an egoist who could not bear the thought of playing second fiddle to Mahatma Gandhi and his protégée Jawaharlal Nehru and wanted a signal achievement of his own?

Jaswant Singh starts off his tome with great promise. The initial chapters which tell us about Jinnah’s childhood are well-written and very interesting. Jinnah was a Khoja. Khojas are Shia Muslims who owe allegiance to the Aga Khan and whose ancestors were Gujarati Lohanas who converted to Islam. Jinnah’s father Jenabhai lived in Kathiawad till he migrated to Karachi. I find it extremely interesting that of the two main actors in India’s freedom struggle and partition, one was from Kathiawad and the other had his roots in the same principality. Jaswant Singh’s account of Jinnah’s time in London where he trained to be a barrister and his initial struggles to establish a name for himself in the legal profession are inspiring to say the least. As for my question why Jinnah fought to create Pakistan, Jaswant Singh gives us a clue in the initial stages when he says Jinnah was a man of impeccable integrity which was never called into question by anyone.

However, after the first chapter – Jenabhai to Jinnah – the book starts to digress. What was till then a crisply written narrative about Jinnah the human being becomes a history book about India’s independence struggle between1910-1947. The narration moves back and forth in time and there is an great deal of repetition. Not all of the text relates to Jinnah or throws light on him. To be honest, I had bought this book in August 2009 almost immediately after its release, but had abandoned it half-way through. It was only recently that I girded myself and picked it up again. Was my dogged determination worth it? I am not too sure. ‘Jinnah’ continues to be a history compilation for another four hundred odd pages. The entire book, with its appendices and index, runs to 669 pages, of which the bulk of the text is about the freedom movement in general. Granted, it is not possible to understand Jinnah or his motive(s) in fighting for the creation of Pakistan unless it is read in the context of the freedom struggle, the book is almost a blow by blow account of the events leading to independence and one gets the feeling of having missed the tree for the woods.

We are told that in his early days Jinnah was an ardent proponent of Hindu-Muslim unity, one who rejected the demand for separate electorates and who did not take part in the Khilafat movement. Until he joined the Muslim League in 1913, Jinnah was a devout Congressman who swore by its secular credentials. As head of the Muslim League, Jinnah entered into the 1916 Lucknow Pact with Gandhi which helped the Congress and Muslim League present a joint set of demands to the British. Then came the unravelling in 1920. Gandhi launched the Non Cooperation Movement and Jinnah was not a big fan of such an approach which required one to break the law. Anglophile Jinnah was also not as big a fan of going native as Gandhi was. We are also told that during the Second World War the Muslim League under Jinnah cooperated with the British and won a number of concessions whilst the Congress party leadership went to jail en masse. However, Jaswant Singh is still unable to tell us why Jinnah started to take the view that Muslims would be better off in an independent Pakistan. Did he really believe that or did he just want a show of his own? Was it the Jinnah who had opposed Gandhi’s civil disobedience movement (because it would break the law of the land) who later called for a Direct Action Day in August 1946?

I assume that not much information is available on many of the key events in Jinnah’s life. Unlike Gandhi, Jinnah did not write his version of ‘The Story of My Experiments with Truth’. For example, Jaswant Singh has little to tell us about Jinnah’s estrangement from his second wife ‘Ruttie’ who was a Parsi and the daughter of a personal friend. Jinnah also became estranged from his only child Dina when she got married to Neville Wadia, a Parsi. There is much more information to be gathered from Wikipedia on matters such as these than in Jaswant Singh’s 669-page book! What is even more surprising is that Jaswant Singh is totally silent on the attempt to assassinate Jinnah by an alleged member of the Kashkar movement on 26 July 1943. The Khaksars, I am told by a number of unreliable sources on the internet, fought for the rights of Muslims, wanted independence for British India, but opposed partition! I don’t know any more about the Khaksar movement other than that it was founded by Allama Mashriqi (also known as also known as Inayatullah Khan) who in 1957 was all set to lead 300,000 of his followers into Kashmir to fight for its liberation until the Pakistani government persuaded him not to.

My biggest grumble therefore is that on topics where there is very little information available in the public domain, especially on what motivated secular Jinnah to push for Pakistan, I would have liked Jaswant Singh to express an opinion or a thesis. The final chapter aptly titled ‘In Retrospect’ is all about Jaswant Singh’s views on partition and how it was a horrible mistake and how it could have been avoided. A lot of the blame falls on the Indian National Congress and Nehru. Jaswant Singh does not say that Jinnah is not to blame. What would have been wonderful, but is conspicuous by its absence, is a view on whether Jinnah himself continued to remain proud of his achievement in the short period that he lived after partition. After reaching August 1947, Jaswant Singh takes his readers directly to the day on which Jinnah died!

One of the things I liked a lot about this book is its opinion on Lord Mountbatten. Various writers, especially Dominique Lapierre and Larry Collins in Freedom at Midnight, have taken a very benevolent view of Mountbatten and his role in the partition of India. Jaswant Singh (rightly in my view) exposes Mountbatten to be a show man who was thoughtless and incompetent and who hastily rushed through partition which resulted in the deaths of over a million Indians.

Jaswant Singh’s writing is straight forward and to the point. At times, there are literary flourishes, which read rather well. However, because it is so lengthy and because it does not have a specific focus, I doubt if the BJP leadership which expelled Jaswant Singh for this book, actually read it from cover to cover!

When I finished ‘Jinnah’ my most basic question about Jinnah and the partition remained unanswered, For this reason, Jaswant Singh’s treatise reminded of the book I once received as a gift. Titled, ‘All That Men Know About Women,’ it had 200 odd blank pages.
Posted by Winnowed at 21:55 5 comments: Links to this post