Book Review: At Home In Mumbai, by Chandrima Pal 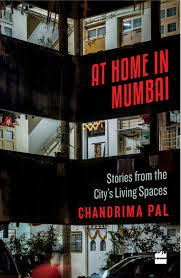 As a human being obsessed with space and privacy, my stint in Mumbai has made me realise that these are not always complimentary. In Mumbai, space doesn’t come cheap. However, privacy is easy to obtain, once you cross critical mass in terms of space. You need to be able to rent your own enclosed space, without having to share it with anyone else. It could be a studio flat with just a room, a kitchenette and a toilet, but once you have that enclosed space to yourself, Mumbai leaves you alone. The crowds on the roads, the jammed commuters on trains, the fellow cab sharers, they leave you in peace, unlike in smaller towns and villages across the length and breadth of India, where space may not be at such a premium, but privacy from intrusive questioning is. If you are a Mumbaikar with a roof over your head and your own walls, you don’t have to worry too much about having to fend off questions such as what’s your salary, are you married, when will you get your sister married off, something that would not be too easy in mofussil areas.

Chandrima Pal has done her time in Mumbai and knows only too well the premium placed on acquiring one’s own habitat in Mumbai. A journalist who had the opportunity to wander around the metropolis while on her beat, meet people ranging from movie stars to slum dwellers, and record their stories, Pal’s second book, At Home In Mumbai - Stories from the City’s Living Spaces, takes the reader into numerous living rooms, bedroom, toilets, kitchens of Mumbaikars, occasionally delving into pain and trauma, at times flirting with happiness and in a few instances, crime. There are stories of Sindhi refugees who came to the city penniless and made it big, big enough to buy good properties, stories of Delhiites who relocated to Mumbai for work and had to live in flats half the size of their former abodes, stories of movie stars who bought properties which defined them forever. Bandra, Versova, Navi Mumbai, SoBo, Pal traverses through them all, as she meets interesting people and gathers her tales.

Pal’s style of writing is gentle, never too intrusive. One can smell the respect which Pal has for individual space and privacy, having had to buy it at a premium while in Mumbai, like everyone else. The narration is simple, never flowery or adorned, but still beautiful. At Home In Mumbai isn’t meant to be a masterpiece, like Suketu Mehta’s Maximum City, but it will leave its mark on you, nevertheless.

Pal’s first novel, A Song For I, was published around six years ago.

Posted by Winnowed at 07:40 No comments: Links to this post