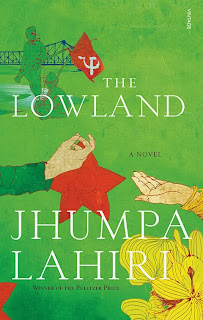 Despite the red communist flag, soldiers and rifles on the cover and the mention of “revolution” on the blurb, The Lowland is the story of a woman who is unable to love her daughter. It’s not very clear why Gauri is unable to love Bela, though towards the end, Lahiri suggests that it could be on account of the betrayal Gauri suffered at the hands of the man she loved. As one has learnt to expect from any Lahiri novel, The Lowland revolves around a Bengali immigrant family in the United States (the Mitras) and the Indian sections serve as a background to the story as it develops. There’s elder son Subhash, studious and not very brave, his younger brother Udayan, who is tougher than Subhash and takes to the path of revolution, Udayan’s girlfriend Gauri, who later becomes his wife, Subhash's and Udayan’s parents, Bela, born of Udayan’s love for Gauri, but brought up by Subhash who marries Gauri after Udayan is killed by the police and finally Bela’s daughter Meghna. There are a few more American spouses and lovers, but they don’t really matter.

Usually, when I review a novel as good as The Lowland and a very good read The Lowland definitely is, I list out the pros before I get to the cons. However, in the case of the The Lowland, I am going to make an exception and deal with the negatives first. This is mainly because lots of things in the The Lowland didn’t work for me, despite Lahiri’s exquisite writing.

Subhash and Udayan are sons of a railway clerk who sends them to a Bengali medium school. The boys are nice, but naughty. One sees them, Udayan in the lead, trespass into the Whites-only Tolly Club and get beaten by a policeman for their pains. One sees the mother take in extra-sewing to supplement their income. There is no mention of the caste the Mitras belong to and one neither sees nor hears of any discrimination suffered by the Mitras on account of their caste. However, the Mitras just don’t come across as Brahmins or any other high caste. At times, I got the feeling that the Mitras were working class and at times I felt they were not. At one point, we are even told that some of Tipu Sultan’s descendents lived next to the Mitras and that the Mitras were invited to visit them.

School boys Subhash and Udayan play games by tapping out words in Morse code. As they grow older, they fool around with a shortwave radio which they rigged up using spare parts scrounged from "Indian army surplus". I was left wondering if the boys were living in Edison or in Kolkata. As we all know, the average Indian school boy doesn’t access army surplus and build short wave radios.

When Subhash moves to the US, we don’t see him miss India much. In particular, there is no hankering for any particular type of Indian food, though he does meet a South Indian who offers him curd rice. We see Subhash cook “curry” and boil a pot of rice for himself and his house-mate Richard. What curry did Subhash cook? Surely there are curries and curries. Granted, The Lowland has been written for an international readership who would be satisfied with a generic “curry”, but I still wanted to know if it was difficult for Subhash to get hold of ingredients for his curry. Surely Rhode Island supermarkets in the 1970s were not stocked with curry powders! A few pages later, when Subhash has a solitary meal at a restaurant, we see him go for an Eggplant Parmigiana. Lahiri doesn’t tell us if Subhash enjoyed the meal or if he liked eggplants in particular. She only tells us that as Subhash ate the “heavy dish”, he watched American football on TV and drank beer. I did find the Eggplant Parmigiana difficult to digest – a Bengali who we know is not a vegetarian, ordering Eggplant Parmigiana at a restaurant rather than a meat dish!

When Gauri becomes a widow, her in-laws take away the meat and fish from her plate. Subhash protests and later rescues her by marrying her and taking her away to the US. However, we don’t see either Subhash or Gauri relish a single meat dish, while in the US, though we are told that Gauri did a fair amount of cooking while still married to Subhash. There is no specific description of what’s cooking. I never saw the Mitras eat beef or pork or otherwise make a conscious effort to avoid either. Towards the end, we see Gauri being served mutton rolls while visiting Kolkata and at the fag end of the novel, when Subhash and his second wife Elise honeymoon in Ireland, there is a reference to sardines from a supermarket. For me, the absence of better foodprints throughout was a big damper.

Subhash and Gauri never worry about money, especially when Subhash is a research student in the US. I don’t know how well research students at US universities are paid, but I found only one reference to money worry, when Gauri proposes that they hire a baby sitter for Bela and Subhash objects on account of the cost involved. However, one does get the feeling that on the whole, Subhash and Gauri are frugal, but it’s as if Lahiri is too polite to mention how tight their finances are. And then there are statements like this: “She made a little routine of it, following the wave of students after the class let out to eat her lunch at the cafeteria of the student union, ordering French fries at the grill, bread, butter and tea, sometimes treating herself to a dish of ice cream.” I just couldn’t believe that an Indian wife, married to a research student, would make a routine of eating out at the cafeteria frequently on her own, when home was close by.

There’s no racism whatsoever in Lahiri’s America. Neither Subhash, nor Gauri nor any of their progeny face the slightest hostility from anyone on account of being Indian or brown, in the entire novel. The bit that got me chuckling was how, just after Subhash and Gauri got married at a Registry, ‘Subhash took her to apply for her passport and then to the American consulate for her visa.’ The visa officer has only kind and pleasant words for Gauri, promising to speed up the visa. Lahiri doesn’t tell us if Gauri got her passport the day she applied for it or if she applied for a visa without a passport. Maybe in those days, we are talking about the early 1970s here, it was not such a big deal to get an American visa and maybe interviews for spouse visas were pleasant experiences. In any event, the pleasant atmosphere continues throughout the novel. Which set me thinking - aren’t all of Lahiri’s previous books written in the same vein? It’s been a while since I read The Namesake and The Interpreter of Maladies, but I don’t think any Indian has encountered any racism anywhere in Lahiri’s America or has had much difficulty in fitting into the US of A. The same holds true for Unaccustomed Earth which came out in 2008.

Lahiri’s descriptions of the main characters made me want to know a bit more about them. I got the impression that Subhash and Udayan are tall, but how tall were they? Was Subhash tall by American standards? Before marrying Gauri, Subhash had an American girl-friend, a single mother who was older than him by many years. Was Subhash as tall as Holly or was he even taller? And what about Gauri herself? Was she as tall as she was attractive? Did Bela come across as a typical puny Asian child when in the midst of her American friends? Or was she as big as her friends were? Was Meghna much bigger in size than her mother since she had a Caucasian father? Lahiri left me guessing.

Subhash and Gauri cruise through America without the slightest hiccup or any disadvantage, but then Lahiri suddenly wakes up and reminds us that Gauri, despite having so gelled into America, has retained her Indian passport and her Indian accent. We see that Bela’s daughter (born out of wedlock to an American father who has moved on) has been named Meghna, at Subhash’s suggestion.

That’s enough cribbing about what’s essentially a great novel and so, let me move on to the positives. I loved Gauri, a woman who married for the second time in order to get away from her cruel in-laws and found it difficult to love her husband or even her child. We see Gauri slowly give up responsibility for Bela. She transforms herself into a go-getting American academician, shredding her Indian clothes and long tresses, though her chosen field of study is philosophy, not a subject with a low access threshold. Lahiri doesn’t offer an easy answer for Gauri’s behaviour, but the betrayal she suffered, details of which emerge only towards the end, points towards a possible explanation.

I also liked Bela, an all-American girl who rejects the ways of her parents in a silent rebellion, becomes a farm-worker and chooses to have a child out of wed-lock when she is thirty four. When Bela runs into a group of Bangladeshi workmen in New York, there is only a mild curiosity about men who are from the same neck of the woods as her ancestors and whose language she has a passing familiarity with. I also liked Udayan, especially how, despite being a tough Naxal, Lahiri endows him with a mild trembling of his hand and vertigo. However, Subhash didn’t work for me, his values and attitudes suddenly all-American with no explanation for losing his Indianness, other than that he wanted Bela all for himself and that he didn’t want to meet people who knew that he was not Bela’s father.

The best thing about The Lowland is Lahiri’s hallmark economy with words. Transitions are always very smooth. For example, Subhash studies chemical engineering at Jadavpur, but when he goes to the US, he studies the effect of chemicals on marine life. The switch from swishing chemicals in a test-tube to pottering around the sea-shore at Rhode Island is quick and accomplished efficiently with an explanation not exceeding a couple of sentences.

Let me end my review with a crib. Though Udayan’s execution by the police is well-written, I am still struggling with the fact that after the police captured Udayan and took him away, they killed him at a place so very close to his house that his family could see him being killed. I also didn’t like Udayan’s contingency plan for escaping from the police if ever they came for him. I mean, I expected something a bit cleverer from the man who used to fool around with morse code and shortwave radios when he was younger.
Posted by Winnowed at 09:35 3 comments: