Book Review: The Outraged – Times of Strife, by Aditya Sudarshan 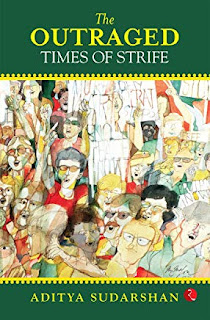 I just finished reading Times of Strife, the second book in Aditya Sudarshan’s The Outraged series. The first volume, Times of Ferment, had come out a little over a year ago. My verdict? Another excellent, muted outburst by Sudarshan.

In Times of Strife, the liberals decide to strike back against the right-wing fanatics who have taken over the country. Ahishor Frances is the leader of the liberal pack, having proclaimed his Manifesto, which draws inspiration from the likes of John Dos Passos, Hans Andersen, John Stuart Mill, Tostoy and Martin Luther King Jr., and proposes a (liberal) way forward for the nation. Ahishor is supported by the liberal set which is now willing to shed sweat, blood and tears for their cause. The best thing about Ahishor is that he is squeaky clean, with no skeletons in his closet and his willingness to call a spade a spade, even when the spade happens to be a close friend or family member.

However, in Sudarshanland, things are never what they appear to be on the surface. To start with, liberals comes in various shades and hues. Are all liberals so very different from the right-wing fanatics from whom they wish to rescue the nation? Godman Narayanan, who squares off against Ahishor and his step-father Karim, is no pushover and holds his own. The beautiful Maithili Krishnan who has fallen into the clutches of Narayanan, seems to have gone into the Godman’s den voluntarily. Does Ahishor have a personal agenda when targeting Narayanan? Do the liberals need to be rescued from extreme liberalism?

What I liked most about Times of Strife, other than the subdued beauty of Sudarshan’s prose, are the sharp twists and turns in the story as one drives along on Sudarshanway. A young lady Ruhi Khanna accuses director Pankaj Pande of sexual harassment. Is Pankaj actually guilty of harassment or is it an affair gone wrong? As the story develops, one gets to know of more facts regarding this distressing case, which complicates the picture even further. Most importantly, until the end, Sudarshan keeps his reader guessing about the outcome of the left wing versus right wing war. A couple of times, I even wondered which side Sudarshan is on, he’s that even-handed and fair.

Sudarshan’s writing style reminded me a bit of classical writers like Charles Dickens and Mark Twain. Even though the story does not pick up tempo until one crosses the half-line, one does not feel like putting down the book, mainly because Sudarshan has such an easy way with words, without any unnecessary frills. Do pick up a copy and read, your money won't be wasted, I assure you.

Not counting Times of Ferment, Sudarshan has published three other novels, namely A Nice Quiet Holiday, Show Me A Hero and The Persecution of Madhav Tripathi.

Posted by Winnowed at 06:18 No comments: Links to this post