Age related discrimination comes in various forms. It may be in the form of a law or rule which creates an entry barrier on the basis of age. It may be in the form of prejudice or stereotyping at work places and elsewhere. Article 15(1) of the Indian Constitution provides that “the State shall not discriminate against any citizen on grounds only of religion, race, caste, sex, place of birth or any of them.” Protection from discrimination on the basis of a person’s age is not provided for by the Constitution, something not very surprising since awareness of the need to prevent age-based discrimination is, even now, over 60 years after the Constitution came into force, very low in India. Also, do remember that the fundamental rights set out in the Indian constitution are available only against the State.

In India, one finds age-discrimination everywhere. Most places of higher study prescribe a maximum age for applicants. One cannot apply to take the Common Law Admission Test (which is mandatory for admission to a five year law degree at a National Law University) unless one is below 20 years of age. To take the Joint Entrance Exam for the prestigious Indian Institute of Technology (IIT), one has to be 25 years old, or younger. The entrance exam for the All India Institute of Medical Sciences has a similar age limit. One cannot take the civil service exams unless one is younger than 30 years as at a specific cut off date. Thankfully, admission to the Indian Institutes of Management is not subject to any age limit.

There has been very little debate about the age limits mentioned above. India has such a young population and there is so much competition that people assume it is justifiable to discriminate on the basis of age. Not many question why a 30 year old shouldn’t be entitled to join a 5 year programme at a prestigious law university or why a 35 year old should be prevented from starting a B.Tech course at an IIT. Wouldn’t a 40 year old man with a fair amount of private sector experience make a good civil servant? Or at least as good as a 26 year old? To some extent, these age limits have been accepted since almost all Indian students are supported by their parents until they start working and very few students take a break from studies before starting college. Even though there are no age limits for entering the prestigious IIMs, there is also no mandatory requirement for prior work experience.

The age-based restrictions for admission to good colleges and the civil services had their origin in the Imperial Civil Service exam instituted by the British government to select eligible young men to rule the jewel in the British crown. Candidates had to be aged between 21 and 24 and initially the exam could be taken only in Britain. The age and venue restrictions were meant to make it difficult, if not impossible, for Indian candidates to sit for this exam and gain entry to the corridors of power. However, even after India’s independence, these age-based restrictions continue to find a place in a number of Indian institutions. Discrimination on the basis of age has not faced any serious challenge in Indian courts. The closest one gets to are a few cases involving air hostesses and their right to continue working even after reaching a certain age.

Throughout the European Union, anti-age discrimination rules were instituted after the Directive 2000/78/EC of 27 November 2000 for establishing a general framework for equal treatment in employment and occupation was passed. For example in the UK, Employment Equality (Age) Regulations 2006 came into effect from 1 October, 2006. Employers in the European Union no longer specify age limits in job-adverts. Even an indirect specification, such as a requirement that applicants for a vacancy must hold doctorates, when a Ph.D is not really needed for the job, would be considered to be a breach of anti-age discrimination rules.

Employers in the European Union are now liable for the actions of their employees who discriminate against or harass other employees on the basis of age. The victim of age discrimination may not always be an older person. In a case under the Irish Employment Equality Act 1998, a newly-recruited and much younger female manager was systematically belittled and humiliated before other staff by a male manager. Senior management had failed to make any effective intervention despite the complainant's request and she eventually resigned. The Equality Officer held that the behaviour constituted age-based harassment under the Irish legislation, as well as gender-based harassment and awarded her EUR 6,500 in compensation.

It is high-time India did away with age-based barriers for admissions to educational institutions, the civil services and other government jobs. The only exceptions to this rule should be jobs where physical ability (that deteriorates with age) is very important, such as employment with the armed forces or the police. Even for such jobs, it is ridiculous to keep the age limit very low. It ought to be possible for any individual below the age of 30 to commence training to join the armed forces or the police.

India should also institute laws which prohibit any employer, from having age as a selection criterion, while hiring employees. All organisations should be required to have internal rules which prohibit any form of harassment (such as calling someone “kid” or “child” or “old man”) on the basis of age. Just as older people should not be discriminated on the basis of age, younger employees too should not have to face stereotypes at their work places.

Finally, I get to the million dollar question – retirement. Is it age-based discrimination to specify a retirement age? Strictly speaking it is. In an ideal world, a person should be called on to retire only on medical grounds. Throughout the European Union, compulsory retirement has been done away with. The UK used to permit employers to compulsorily retire employees at the age of 65, under an opt-out clause in the EU Directive mentioned above, but this has also been withdrawn. However, I feel that in India, compulsory retirement at a mandated age is justified. India still has such a large number of unemployed people that it cannot afford to allow its senior citizens to keep working until they voluntarily decide to call it a day.

Posted by Winnowed at 06:49 2 comments: Links to this post 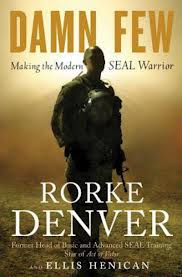 Ever since three US Navy SEALs lying on the fantail of USS Bainbridge downed three pirates holding a hostage inside a cabin in the MV Maersk Alabama, SEALs have become a household name in the world of counter-terrorism. The assault on bin Laden’s compound in Abbottabad only cemented that reputation. In case you’ve wondered what it takes to be a US Navy SEAL and what goes into a making of a SEAL warrior, then Rorke Denver’s book Damn Few is for you. True, there have been a number of books on SEALs before, some of them written by former SEALs. Some months ago, I had reviewed former navy SEAL Matt Bissonnette’s book “No Easy Day” which detailed the raid on Osama Bin Laden’s compound in Abbottabad by SEAL Team Six, of which Bissonnette was a part. No Easy Day expends a lot of energy discussing Navy SEAL tactics and the workings of the mind of a SEAL. Similarly “Seal Target Geronimo”, Chuck Pfarrer’s narrative about the bin Laden raid, though burdened with a number of made-up add-ons, describes SEAL training in good detail. However, Denver’s Damn Few is almost entirely about the making of a SEAL and cuts to the chase right from first page. Also, Denver has been involved in training SEALs and one hears from the horse’s mouth how some men make the cut and some don’t. There are a few snippets of action from Iraq and Afghanistan, but they are just that – snippets – more to illustrate how SEAL training helped them than anything else.

Damn Few is not an impersonal description of SEAL selection process and the training imparted to SEALs. Rather, it is Denver’s very personal story of how a sports crazy boy, not particularly good with Math, brought up by a strong-willed, single mother, motivated by Winston Churchill's writings, ended up as a SEAL. In addition to SEAL training, there are touching tales of Denver growing up with his younger brother, with whom he is very close, bits of family history and how Denver met his wife Tracy.

Like his predecessor Bissonnette, Denver steers clears of politics. This is a soldier’s narrative and it’s written in black and white. They are good guys and there are bad guys and no prizes for guessing who the good guys are. If you are looking for a discussion on American politics or on the decision to invade Iraq or Afghanistan, you will be disappointed. Denver is a soldier who obviously believes in obeying orders – his not to question why.

Denver’s narrative, assisted no doubt by co-author Ellis Henican, a columnist at Newsday, reads very well. The language is simple with an occasional flourish. However, what makes Damn Few stand out from other books about SEALs is that Denver not only trained to be a SEAL, but has been involved in training others and devising training plans. In fact, Denver’s involvement in SEAL training is so total that he allows his readers to be privy to crucial questions such as whether quality will be compromised if the number of SEALs is drastically increased.

In all, Damn Few is an excellent book for any SEAL fan.