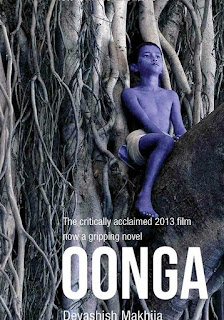 Usually, books are made into movies. In the case of Devashish Makhija’s Oonga, the movie, which premiered at the New York Indian Film Festival in 2013, has been made into a novel.

Oonga the protagonist, an eight year old adivasi boy who adores Lord Ram, is unable to join his friends when they were taken to the city by Hemla didi, their Hindi teacher, to watch a play about Sita’s abduction by Ravana. So, Oonga goes to the city on his own to watch the play Sitaharan, has a number of adventures en route, and returns home safely, smeared in blue paint, like his super hero Rama.  If this gives you the idea that Oonga is a movie for children, by children, you couldn’t be more wrong. Oonga also has paramilitary forces and Naxalites, adivasis living in the forests of central India and a greedy mining company devouring the sacred land. Makhija is a good mixologist and he serves his readers a potent cocktail, one that will leave behind a bitter sweet aftertaste even after it disappears down the gullet.

Oonga is naughty, Oonga is lazy, Oonga is brave, Oonga is curious, Oonga is adorable, Oonga is impish and Makhija has the reader rooting for Oonga from the beginning till the end. One worries for his safety, laughs at his pranks and heave a sigh of relief as he makes it back home to the safety of his mother Oongamma. Almost all characters are as multi-dimensional and interesting as Oonga. There’s Hemla the teacher who tries to teach Hindi to her wards and is tortured by security forces for her pains. Manoranjan the commanding officer, who bullies his two underlings Pradip and Sushil is perfect case study material for anyone who wants to understand how power corrupts so absolutely even in the hands of a not-so-important security officer. Pradip bullies ‘milk-tooth’ Sushil even more than Manoranjan and one can see young Sushil being taken apart and remade in the same mold as Pradip. And then there are Laxmi and Linga, Naxal leaders, totally committed to their cause, who believe that ‘an onslaught of violence can only be countered with an equal and opposite violence’.

The school building where Hemla is detained and tortured by Manoranjan is one which used to host adivasi children from all eight villages in the region. There was a time when they would hang paper flags all around the school where the barbed wire now runs. There was a time when all you could hear from inside those walls were happy songs and a chorus of voices chanting the alphabet. Now, there is deathly silence, like at the bottom of a coal mine.

Why do men like Sushil and Pradip join the para-military forces? In Sushil’s case, his father had been a farmer who’s land a corporation had wanted to acquire. Resistance to the acquisition resulted in a police complaint, an arrest and the ransacking of their hut. ‘And at twelve it hit me that a man as big and healthy and strong and brave as my father could also turn into a slobbering, fucked-up mess when face to face with someone in uniform. The Uniform was everything. What the Uniform said, we had to follow. Where the Uniform took us, we had to go. That’s when I decided I wanted to get into one as soon as possible. I wasn’t going to waste my entire life tilling a field morning to night, only to have it taken away in a heartbeat.’

Do Naxalites solve the problems faced by adivasis? The answer is a resounding No, at least as far as Hemla is concerned. The Naxals couldn’t save Padua and Hemla’s village Pottacheru is the next target. After Hemla escapes from the clutches of Manoranjan who brutalizes her, she runs into the Naxal dalam led by Laxmi and Linga. ‘You went to my village without my permission. And because of you they are in danger now,’, Hemla accuses the Naxals. ‘If any of them die tonight’, Hemla says, ‘that blood will be on your hands’.

Linga has had enough. He cocks his rifle in Hemla’s face, fuming.

‘Don’t come to the village again. Without you we may still have a chance. With you, we have none.’

Makhija's message couldn't be clearer. If only the Naxals stopped muddying the Adivasi waters, the Adivasis would have a fighting chance to find their moorings and lead a humane existence.

Oonga has the feel of a screenplay, owing to its movie origins, which works well for this story. Makhija writes well, in simple language, with dramatic flourishes and interludes. He switches effortlessly from Oonga’s baby talk to the theatre dialogue for Sitaharan to the Naxals’ and the security forces’ rough and ready speech.  I enjoyed reading Oonga and highly recommend it.