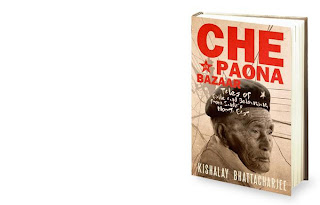 Senior journalist Kishalay Bhattacharjee is a veteran of the North East. Not only did he grow up in Shillong, he also covered the conflict in the North East for seventeen years, while working for NDTV. Bhattacharjee’s offering Che in Paona Bazaar has a series of snapshots from Manipur, twenty two in total. Each of these vignettes offers a glimpse of life in Manipur and the rest of the North East for the common man. Bhattacharjee uses a fictional character called Eshei to tell his stories. Eshei seems to be the typical Manipuri girl. She can speak the lingo and knows the culture and food, but has spent a substantial part of her life outside the North East, in Eshei’s case, in Delhi.

Bhattacharjee writes well, his touch light and sure. When food is described, the reader gets to taste it. When Manipur’s or the North East’s history is narrated, we get to witness it. When Bhattacharjee tells us that the tribal areas of Manipur and Nagaland have been stripped of all wildlife due to excessive hunting, we feel outraged. The book’s title is derived from Paona Bazaar, Imphal’s most popular street which offers terrific bargains for those interested in buying Chinese goods. Umbrellas can be had for Rs. 50, mosquito-repellent tennis racquets for Rs. 90, fake Levi’s canvass shoes for Rs. 100 and pirated DVDs for Rs. 35 each. A majority of the items sold in Paona sport Che’s image.

However, the most important takeaway from Che in Paona Bazaar is that the people of Manipur are tired of the insurgency. Militants enforce their diktat through coercion. Bhattacharjee tells us that the man on the street wants ‘good roads, a salary without percentage cuts, drinkable tap water, electricity, good schools and security’. The average militant is a goon, out to extort money and doesn’t have much ideology. We are told that ‘six months after two dozen ageing women stripped publicly in protest against the Assam Rifles, a Meitei girl walked into a room to make love to a young army officer. There was nothing political about it. He had come from thousands of kilometres away and had connected with someone. Sex had nothing to do with borders and roots. It was merely an impulse to feel alive and desired.’ Bhattacharjee tells us that every Manipuri supports Irom Sharmila. ‘Not supporting Sharmila would be tantamount to treason in Manipur, but the support is only a posture. Her struggle has been painfully lonely.’ To be honest, I was not fully convinced that these anti-militancy feelings are Eshei’s and not Bhattacharjee’s.

Towards the end of the book, Bhattacharjee tells us that though he went to school in Shillong, he did not learn any Khasi. Shillong has the air of an educational town, like many hill stations developed by the British, but the locals are not educated in those institutions. Bhattacharjee wonders what is at fault – ‘the inability of the locals to assimilate the outsiders into the system or the haughty stubbornness of the plainsmen to adopt any of the local attributes into their own lifestyles?’ The key to resolving the militancy in Manipur and the rest of the North East could lie in the answer to this question.